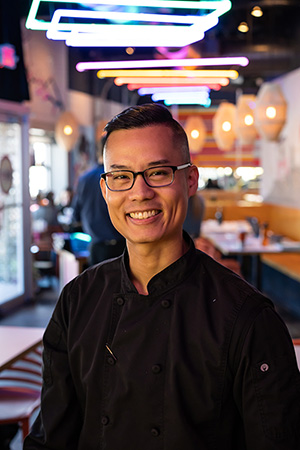 Chef Jay Huang is a classically trained sushi chef with two decades of experience. His committed to seafood sustainability has led Lucky Robot to be recognized as the first sustainable sushi restaurant in Texas by the James Beard Foundation. He is an ambassador for New Zealand’s farm raised Big Glory Bay King Salmon. In 2016 and 2018 he was a finalist for the international Ora King Awards, which highlights sustainability through culinary innovation and creativity.

Chef Jay has lived and explored Taiwan and Japan to eat and study the essence of sushi and Japanese culture.
At Lucky Robot, Chef Jay balances the simplicity and precision of Japanese technique with the exotic punctuation of Latin American ingredients in his modern Nikkei style cuisine.
Jay's Youtube Page
Jay's Blog